So, for the record, I’m not vegan or vegetarian. Nor did I do the Veganuary thing. I do however eat lots of veggie meals and am at the point where I’m consuming less and less meat. So, for those who are taking on this month’s vegan challenge, or just looking for something different to eat, here is a recipe for a vegan taco “meat” filling. Here is what you’ll need: 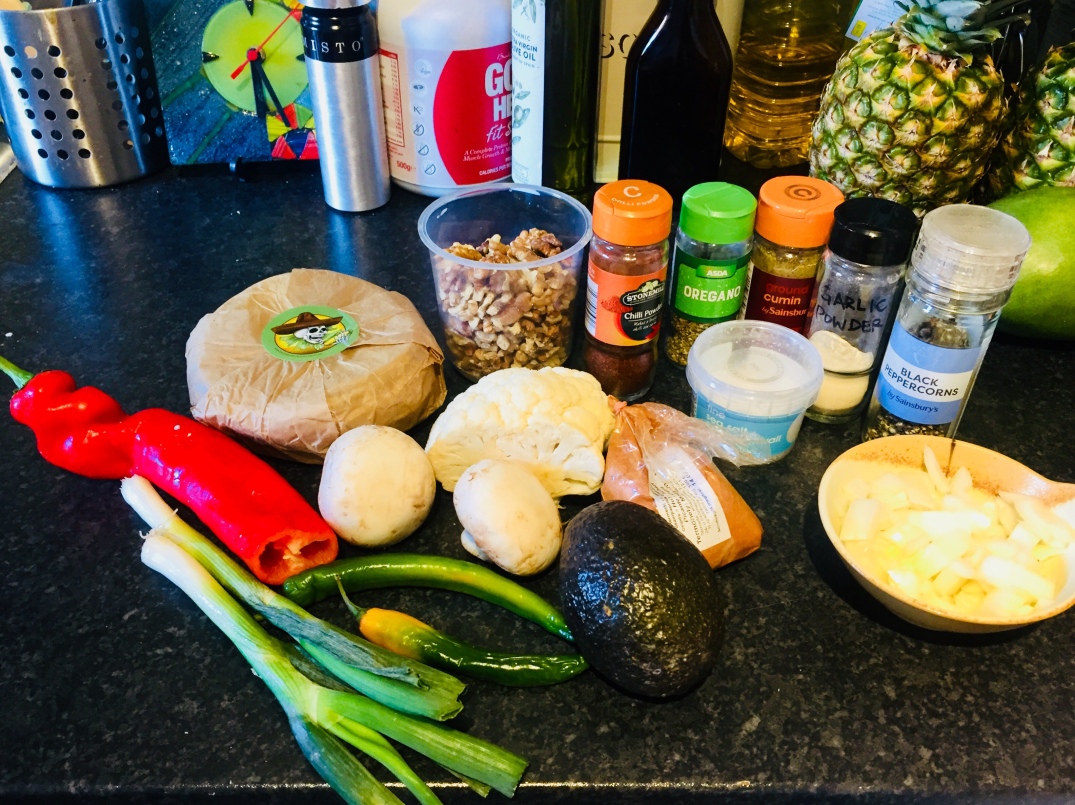 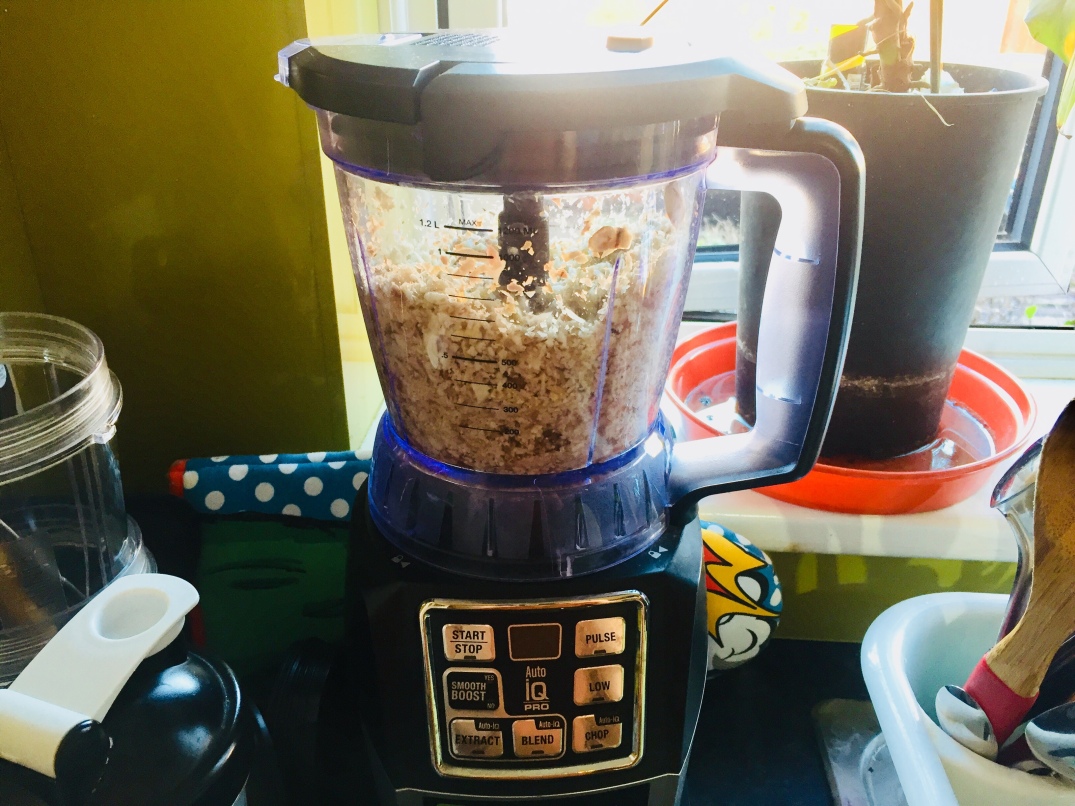 In a food processor, coarsely chop the cauliflower, mushrooms, and walnuts. The walnuts are from Zero Green, an eco- friendly store in Bedminster where you bring your own containers to fill in order to reduce waste.

Combine the chopped mixture with the diced onion in a large skillet. Pour the olive oil over the top. Then add the salt, pepper, chilli powder, oregano, paprika, cumin, and garlic powder. And if you’re curious, I picked up the paprika during a trip to Hungary, and most of the other spices are also from Zero Green in Bedminster, using my old spice jars once they ran out.

Mix the “meat” well and let it cook away. The moisture released from the mushrooms will help bind the spices. As that was coming together, I roasted some veg I wanted to use in the tacos. 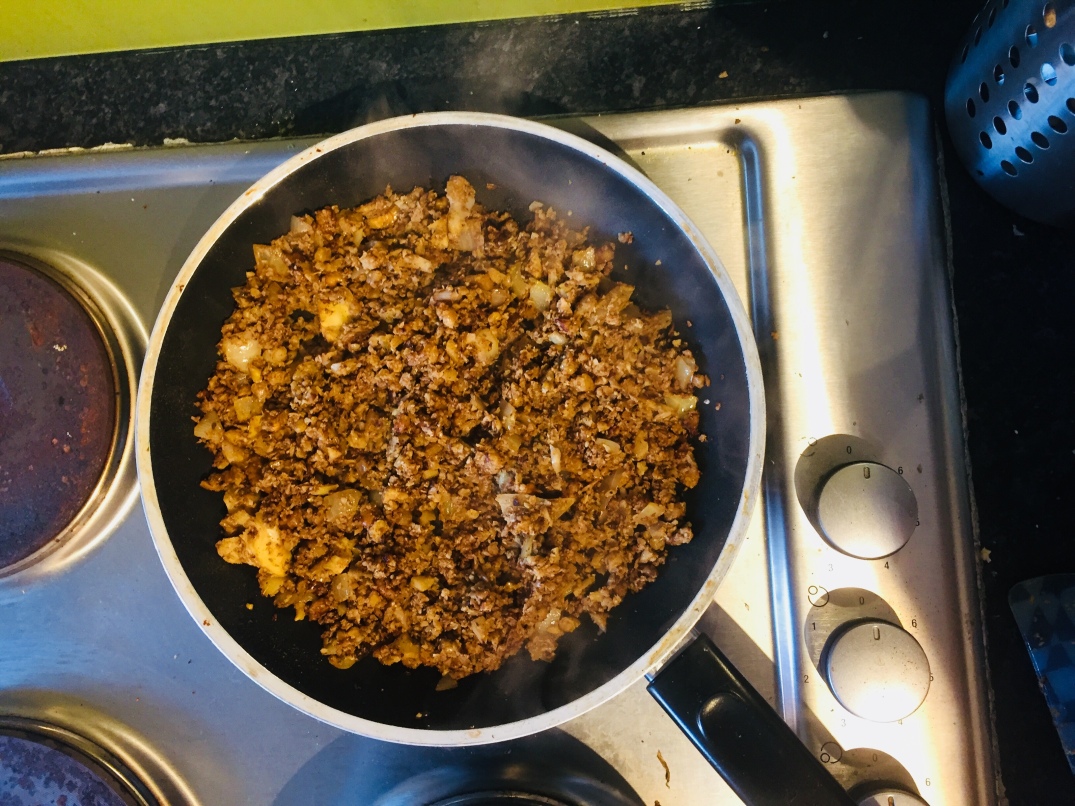 The “meat” cooked for almost 15 minutes, and kind of looked like ground beef in the end.

Now, simply put your tacos together. If you’re interested, these tortillas are made fresh by The Little Tortilleria, and sold locally by Otomi, a Mexican shop located near the Clifton arcade. And for £2.80, they are good value in order to make authentic tacos at home.

And there you have it, Vegan Tacos! I never really thought this is something I would attempt to make. To be honest, I’m used to eating carne asada tacos. These didn’t taste like that, but were still pretty damn good. The texture was definitely meat like which was surprising. I think I’ll have to tweak the seasoning a bit next time, but not bad for my first try! If you’re looking for a vegan taco recipe, or just something a bit out of the ordinary, give these vegan tacos a try! Thanks for reading and Happy Eating!