Ahh, a typical English summer day. Overcast, rainy, not too hot… more like a California winter for this west coast girl! Well, when life gives you lemons, you make lemonade.  But I live in Bristol and here, life tends to give you cider sometimes.  So, I decided to make apple cider ice cream. I mean, it is still summer after all.  I don’t have an ice cream maker, but I decided to try this anyway and will post the results however it turns out.

Here is the recipe, which consists of a typical ice cream base with a reduced cider/sugar mixture added in for flavor.  The cider I’m using today is another lovely selection from Ralph’s Traditional Cider, made in Wales. I used a bottle of their perry for a gorgeous cake the other week, which can be found here. This one is a sweet, still 7% apple beauty and will be perfect for today’s recipe:

First, you’ll want to add one cup of the cider and 1/4 cup of sugar to a saucepan and bring to a boil until it is reduced to approximately 1/3 of a cup.

Make sure you keep an eye on the bubbling mixture, stirring it throughout to prevent any burning.

Once reduced, take off the heat source and add it into a saucepan with 1 cup of milk, 1 cup of double cream, and 1/4 teaspoon cinnamon, whisking the entire time.  In the future, I will use the same sauce pan instead of transferring the cider mixture as it will need to start warming up.  In this case, I switched the hob on mark 1 as you will need to add some of this in the next step. 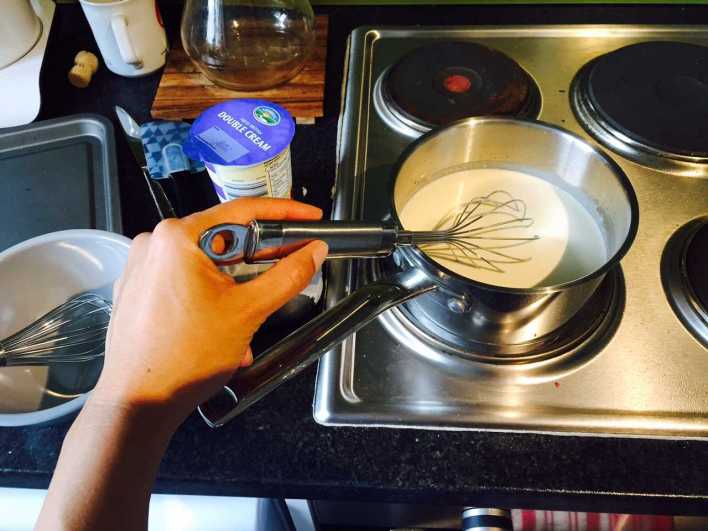 In a separate small bowl, add the three egg yolks and whisk.  You are basically creating an almost custard base, so make sure none of the egg whites are attached.  Once the eggs yolks are whisked to a smooth consistency, you’ll want to temper them by adding some of the warm cider/dairy mixture.  I added 1/3 of a cup to mix with the yolks. 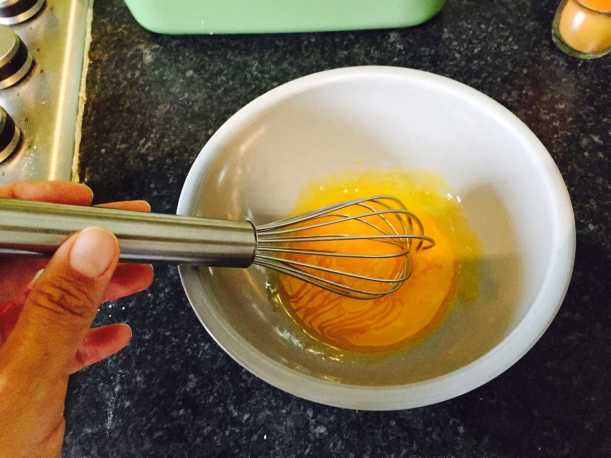 Once tempered, add the yolk mixture to the saucepan, bring to a boil and whisk away.  You want to cook this until thick; you’ll know its enough when it coats the back of a spoon.  Since this is the first time I’m making ice cream, I thought it was thick enough, but now looking at the picture, I think I should have given it a few more minutes.

Once mixed and thick, transfer to a heat proof dish to let it cool to room temperature.  You can do this by placing it partially in an ice bath.

Since I didn’t have any ice or ice trays, I put it by the window since it was pretty much the antithesis of a summer day.  This is also the container I will be freezing it in since I do not have an ice cream machine.  After it cools, you can transfer the mixture to a machine if you have one and let it churn away. If not, just place a lid over it.

If like me you are trying it freestyle, it is recommended that you use a whisk to stir the mixture every 45 minutes until frozen or nearly there.  To be honest, this process took too long for me to be that vigilant.  I stirred it once, then realized it was 9 pm and started to get ready for bed.  This morning, I checked on it and it sure was frozen. Like a brick.  So it will need to thaw out some before I scoop it out for tonight’s dessert.

So, the verdict on this recipe is still out.  I don’t think I will try this again as it really did take much longer than I thought.  And in the end, didn’t produce more than about 2 cups of ice cream which I can easily polish off myself if I didn’t love my husband so much.  I will update this post tonight after I taste it, but for now, I can’t even scoop out a bit.  I have another recipe for a much easier no churn ice cream, which I hope to try next week after all the Harbor Festival fun this weekend in Bristol.  I do think this is a good recipe, but perhaps it is more suited for those who have an ice cream machine.  Stay dry out there, thanks for reading and Happy Eating! That is, when your ice cream thaws out….

UPDATE: So, I let the ice cream thaw out and it was great!  The flavor reminds me of autumn, so will make this again in a few months for sure. I think a nice caramel apple sauce on top would compliment it well.